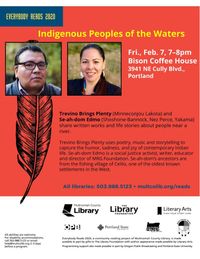 Indigenous Peoples of the Waters

Se-ah-dom Edmo is a social justice activist, writer, educator and director of MRG Foundation. Se-ah-dom’s ancestors are from the fishing village of Celilo, one of the oldest known settlements in the West.

Trevino will have a short set before featured writer Mark Doty.

Louise Erdrich, National Book Award-winning author of The Round House, collaborates on video poems with her sister Heid and an all-indigenous filmmaking crew including musician-poet Trevino Brings Plenty and filmmaker Elizabeth Day,

Trevino L. Brings Plenty is a poet and musician who lives, works, and writes in Portland, OR. He is singer/songwriter/guitarist for the musical ensemble Ballads of Larry Drake. He has read/performed his work at poetry festivals as far away as Amman, Jordan and close to his home base at Portland’s Wordstock Festival.

In college, Trevino worked with Primus St. John and Henry Carlile for this poetry work, studied with Tomas Svoboda for music composition, and Jerry Hahn for Jazz guitar.

Trevino is an American and Native American; a Lakota Indian born on the Cheyenne River Sioux Reservation, South Dakota, USA. Some of his work explores the American Indian identity in American culture and how it has through genealogical history affected indigenous peoples in the 21st century. He writes of urban Indian life; it’s his subject.